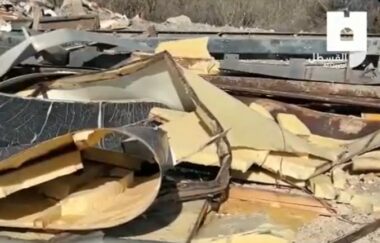 WAFA correspondent said that a large police force escorted a bulldozer to the neighborhood, which lies on the eastern slopes of Jerusalem, where the heavy machinery tore down the car wash.

At the same time, an excavator leveled a plot of land owned by an employee with the Islamic Waqf department, who is currently in Israeli custody.
For the residents of al-‘Isawiya, a Palestinian village of some 20,000, Israeli police vehicles have become an everyday reality on the neighborhood streets, while police drones fly above – surveilling each move of the neighborhood’s residents.
Nestled in the hills of East Jerusalem, al-‘Isawiya is plagued by poor infrastructure, and residents are constantly harassed by the Israeli police.

Rights groups have long pointed out that Israel’s discriminatory policies in East Jerusalem – which include routine home demolitions, discriminatory allocation of building permits, and the forceful expulsions of Palestinians from their homes for the benefit of Israeli colonial settlements – are aimed at driving out Palestinians from the city to tilt the demographic balance in favor of its Jewish population.