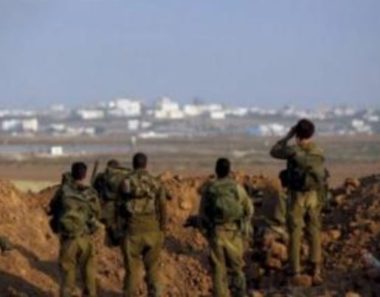 The Israeli army confiscated, Thursday, at least 1500 Dunams (370.65 Acres) of Palestinian lands, owned by the residents of Doura town, south of the southern West Bank city of Hebron, by reinstating a military order, issued in 1987, regarding the illegal annexation of the lands that were designated as “state-owned lands.”

The lands in question as not only owned by the Palestinians, by are also inhabited by them, and include many homes, agricultural structures and are planted with olive and almond trees. The lands are under the jurisdiction of Doura City Council.

Attorney Salah Shalalda, a member of the Legal Department of the Wall and Colonization Resistance Commission, said the first order, which was issued in 1987 designated Basin #8 of Doura as “state lands”, and in July of this year, Israel reexamined the order, and altered it to confiscate more lands.

Shalalda added that the Commission held a meeting with the landowners, Engineers and the District Coordination Office, and informed the families of the needed documentation and procedures to file appeals, especially since many of the lands are in Area B of the West Bank, under Palestinian Civil and Administrative control.

Abdul-Hadi Hantash, a Palestinian expert in maps and Israel’s illegal colonialist activities, said the order, although an old one, was modified recently in order to illegally annex more Palestinian lands, on both sides of Be’er as-Sabe’ Road, which connects the eastern countryside of Doura with the al-Thaheriyya town, south of Hebron, after claiming the lands are “state-owned.”

The lands are owned by the families of Amro, Abu Sharar, al-Khatib, Shahin, Doudin, al-Harbiyyat, in addition to other families that recently bought lands in the same area.

Hantash stated that all the families have the needed deeds proving their ownership of the lands, including deeds issued during the Ottoman era.

The largest segment of the lands is in Abu Hilal area, Ein Omran and the al-Majoor agricultural area, in addition to lands where Israel built a military base and tower in al-Majnoona area, extending from the al-Jabal al-Abiad to the east of Doura, until the village of Deir Razeh.

Hantash called on various legal and human rights groups to intervene and to aid the landowners in countering the illegal Israeli confiscation orders, especially since Israel intends to build a new colony in the eastern part of Doura, thus cutting any geographical contiguity, and preventing any Palestinian constructions or development in that area.