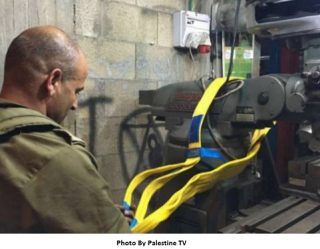 Israeli military vehicles invaded, on Tuesday at dawn, the West Bank city of Bethlehem, and Doha town, before breaking into a number of workshops, and confiscated lathing and blacksmith machines. Many Palestinians have been injured by army fire during clashes that took place following the invasion.

Media sources in Bethlehem said the soldiers broke into many workshops in Bethlehem, and Doha west of the city, and confiscated a large number of machines.

The sources added that the soldiers placed posters stating that they believe there is a “workshop is involved in manufacturing weapons,” without actually clearly stating which one.

The workshops belong to many Palestinians; some of them have been identified as Ismael al-Hanash, Johny Anastas, and George Danho.

The army also invaded a Cafeteria in the Cinema area, in the center of Bethlehem city, and detained the workers for several hours while violently searching it.

Clashes took place in Bethlehem and Doha after the soldiers invaded them, and the soldiers fired live ammunition, rubber-coated steel bullets and gas bombs.

The Bethlehem office of the Red Crescent has reported that one Palestinian was shot with a live round fired by the soldiers, five others were shot with rubber-coated steel bullets, and at least six suffered the effects of teargas inhalation.