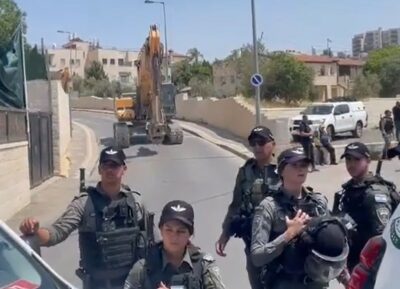 Local sources said the soldiers and police officers invaded the town before surrounding the home owned by Mohammad Jouda and Yazid Teena and demolishing it.

The demolished property had a 500 square/meter parking garage on the first floor and two 120 square/meter apartments on the second.

The demolition displaced 13 Palestinians, six of them from Jouda’s family, and seven are Teena’s family.

“We filed several appeals and had many court hearings; they first demanded that we pay a 30.000 Shekels fine, then another court voided that ruling and asked us to pay 50.000.” Jouda said, “There was supposed to be another court hearing in September….”

Mohammad’s wife, Widad Jouda, said the soldiers cuffed and detained her husband in a military vehicle while demolishing the property and assaulted her son.