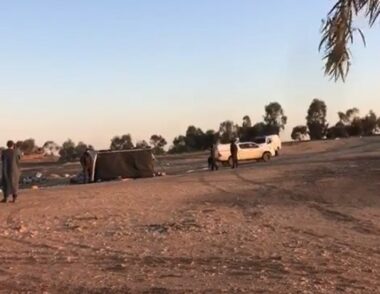 The Israeli authorities demolished, Tuesday, the Bedouin Palestinian village of al-Arakib in the Negev for the 197th time since the year 2000, and displaced its residents, leaving them in the cold.

Media sources said many army jeeps and police vehicles invaded the village, and demolished it, after forcing the residents out of their dwellings.

It is worth mentioning that this is the first demolition since the beginning of this year, as the soldiers demolished it last on December 20, 2021, for the fourteenth consecutive time that year alone.

Every time the village is demolished, the locals rebuild it using wood, tin, and plastic sheets to shelter themselves from the summer heat and the cold winter.

The village was destroyed 197 times since the year 2000, in addition to ongoing violations such as uprooting and bulldozing crops and preventing the families from raising livestock.

The village is inhabited by twenty-two families of about eight hundred people, who depend on livestock and agriculture as their only sources of livelihood.

In the 1970s, the residents managed to prove ownership of only 1250 Dunams of thousands of Dunams the Palestinians own in the area.

It is worth mentioning that the Israeli autohides started lately massive invasions and abductions of the residents, in addition to bulldozing Palestinian lands, including the destruction and bulldozing in Sa’wa village in the Negev, nearly two weeks ago.

Moreover, many Palestinian cities and towns in historic Palestine have been facing increasing violations, especially the refusal to grant them construction permits to build homes, industrial workshops, and stores even though they are citizens of Israel and are supposed to be granted equal rights.

The Bedouin communities in the Negev, especially those designated as “unrecognized villages” although they predate Israel, are subject to frequent demolitions of homes, tents, and structures, including barns, land confiscation, the uprooting and bulldozing of farmlands, along with various other violations.