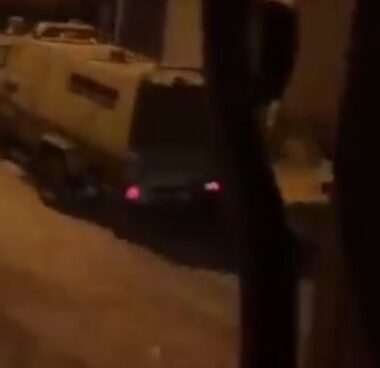 Updated: Israeli soldiers abducted, on Tuesday at dawn, at least twenty Palestinians, including former political prisoners and a teenage boy, from their homes in several parts of the occupied West Bank.

They added that the soldiers also invaded Ya’bad town, southwest of Jenin also searched homes and abducted a wounded Palestinian, who was shot by the army in a previous invasion, identified as Ibrahim Abdul-Rahim Abu Bakr.

Furthermore, the soldiers abducted Mohammad Mohamoud al-Ahmad and Amin Abdul-Rauf Boshnaq, from Rommana town, west of Jenin, while crossing a military roadblock near Ramallah, in the central West Bank.

Also, the soldiers invaded Azmout village, east of the northern West Bank city of Nablus, and posted leaflets warning severe punishment and constant invasions if the Palestinians do not stop the protests.

In addition, the soldiers invaded Abu Shkheidim village, northwest of Ramallah, searched many homes, and abducted Issa Shalalda in addition to a former political prisoner, identified as Amir Abu Thaher. The soldiers also summoned Majed’s father, Mohammad, for interrogation at the Etzion military base and security center, south of Bethlehem, in addition to invading and searching the home of a woman, a former political prisoner, identified as Amal Taqatqa.

In Beit Sahour, east of Bethlehem, the soldiers abducted Rowaid Shahin, from his home.

Names of the abducted Palestinians across the occupied West Bank:

Medical sources said Fahmi suffered the severe effects of tear gas inhalation while inside a clinic run by UNRWA (The United Nations Relief and Works Agency for Palestine Refugees) along with many other patients who also were injured by the gas bombs.

One of his relatives said the man had various preexisting medical conditions, including kidney failure and diabetes, and added that many patients in the clinic also suffered the effects of tear gas inhalation.

He stated that Fahmi frequently heads to the clinic for medical treatment, and constantly undergoes dialysis.