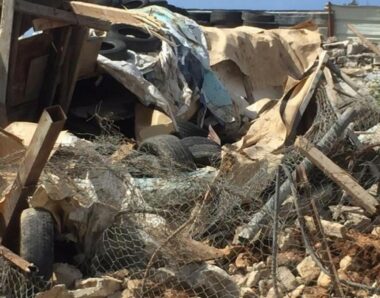 Ibrahim Ghayatha, the acting mayor of Nahhalin, told the WAFA News Agency that several army jeeps and bulldozers invaded the az-Za’nouna area in the eastern part of the town and isolated it.

He added that the soldiers demolished several agricultural sheds owned by a few Palestinians from the town, for being built with permits from the so-called Civil Administration Office, the administrative branch of Israel’s illegal occupation.

The structures were all licensed by the local Town Council and were built on lands the Palestinians privately own.

Nahhalin witnesses frequent Israeli violations, including constant invasions and demolition of homes and structures, in addition to current standing demolition and halt construction orders of several homes and sheds.

In related news, the army demolished a car repair facility and a wall surrounding it near the illegal Annexation Wall in Anata town, northeast of the occupied Palestinian capital, Jerusalem, in the West Bank.

The soldiers also demolished an under-construction home owned by a Palestinian political prisoner in Bil’in village, west of Ramallah in the central West Bank.