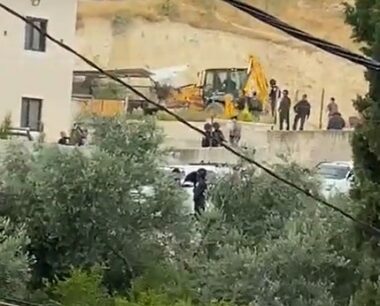 On Wednesday, Israeli soldiers invaded the al-Isawiya and Beit Hanina towns in occupied Jerusalem, demolished a barn, and bulldozed a concrete foundation.

Mohammad Abu al-Hummus, a member of the Follow-up Committee in the al-Isawiya town, said the soldiers demolished a barn for horses owned by Palestinians from the local Mheisin family.

He added that the barn’s demolition was conducted without a warning, an issue that denied the family the opportunity to file an appeal.

In Beit Hanina town, the soldiers demolished a concrete foundation of a building after surrounding and isolating the area around it.

In related news, the army demolished a car repair facility and a wall surrounding it near the illegal Annexation Wall in Anata town, northeast of the occupied Palestinian capital, Jerusalem, in the West Bank.

The soldiers also demolished an under-construction home owned by a Palestinian political prisoner in Bil’in village, west of Ramallah in the central West Bank.