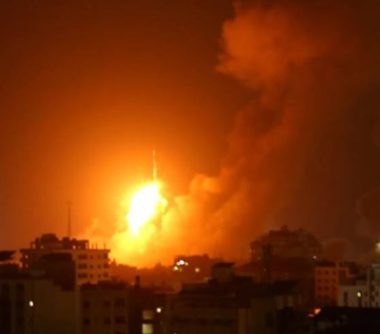 The Israeli Air Force fired, late on Sunday at night, several missiles into areas in the northern, central and eastern parts of the Gaza Strip, causing excessive damage; the army claimed it was retaliating to a shell fired from Gaza.

Media sources in Gaza said the army fired several missiles into an area near the Nusseirat refugee camp, in central Gaza, causing excessive damage without leading to casualties.

They added that the army also fired missiles into a site in Beit Lahia, in northern Gaza, and another building southeast of Gaza city, causing excessive property damage, and that Israeli navy ships fired many flares near Gaza city.

According to the Palestinian Quds News Network, two of the targeted sites are run by the al-Qassam Brigades, the armed wing of Hamas, in northern and central Gaza.

The Israeli army claimed that it was retaliating to one shell, which was reportedly fired from the Gaza Strip, and landed in an open area near Sderot in the Negev, leading to a “brush fire,” according to Israeli Ynet News.