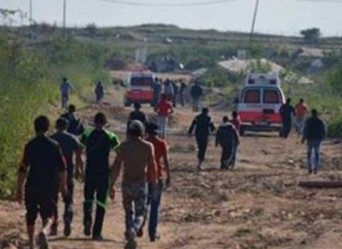 Palestinian medical sources have reported, Friday, that a young man was injured by Israeli army fire, east of the al-Boreij refugee camp, in central Gaza.

The sources said the young man was shot with a live round in one of his legs, while many Palestinians suffered the effects of tear gas inhalation.

The injuries took place during clashes that took place with Israeli soldiers, stationed across the border fence, east of the al-Boreij refugee camp, after the army fired live rounds, rubber-coated steel bullets and gas bombs on protesters close to the fence.

In related news, several military vehicles invaded the town of ar-Ram, north of occupied East Jerusalem, and fired gas bombs and concussion grenades at local protesters, who hurled stones and empty bottles on the army jeeps.