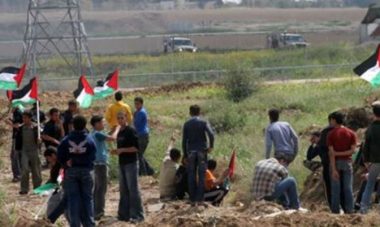 Israeli soldiers attacked, Friday, Palestinian protesters on their lands, near the border fence along the eastern border of the besieged Gaza Strip, and shot five with live fire.

Medical sources said the soldiers shot two Palestinians near Nahal Oz military base, east of Gaza city, before local medics rushed them to a local hospital.

They added that the soldiers shot two other Palestinians near the Shuahada Graveyard, east of Jabalia refugee camp, in northern Gaza.

Another Palestinian was shot in Palestinian lands, east of Khan Younis, in southern Gaza.