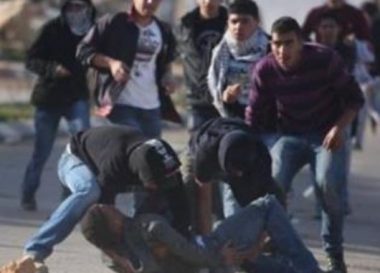 Israeli soldiers shot, Friday, two young Palestinian men, and caused at least one to suffer the effects of teargas inhalation, at the main entrance of Beita town, southeast of the northern West Bank city of Nablus.

The Red Crescent in Nablus said the soldiers shot two young men with rubber-coated steel bullets and caused at least one Palestinian to suffer the severe effects of teargas inhalation.

In addition, a warehouse in Beita Market caught fire after the soldiers fired gas bombs and concussion grenades at local protesters, before firefighters rushed to extinguish it.

Furthermore, dozens of Palestinians marched near Huwwara military roadblock, south of Nablus, marking the 49th anniversary of the establishment of the Democratic Front for the Liberation of Palestine (DFLP).

The soldiers attacked the protesters and fired gas bombs and concussion grenades at them.