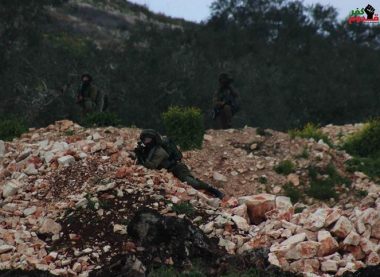 Israeli soldiers attacked, Friday, the weekly procession against the Annexation Wall and Colonies in Kufur Qaddoum town, east of the northern West Bank city of Qalqilia, and shot three Palestinians, including one child.

The Popular Committee in Kufur Qaddoum said the procession started from the center of the town, before heading towards the main entrance, which was blockaded by the army fifteen years ago to enable east access for illegal colonizers, driving to and from Kedumim illegal colony, built on private Palestinian lands.

Morad Eshteiwi, the coordinator of the Popular Committee, said the soldiers fired rubber-coated steel bullets and gas bombs at the protesters, wounding two young men, and one child.

He added that army sharpshooters stationed themselves at the top of the mountain, overlooking the town, and fired live round, but did not injure any person.

In related news, the soldiers shot a Palestinian child with a live round in the al-Janiya village, west of Ramallah, in central West Bank.

The child was shot after the soldiers invaded the village, and attacked protesters; he was rushed to Palestine Medical Complex suffering from a gunshot wound to his leg.