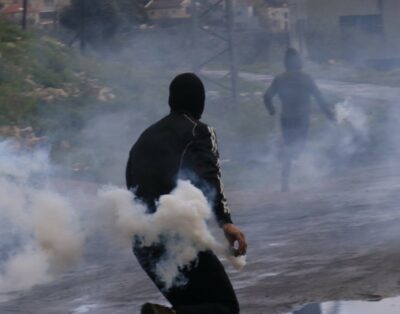 On Friday, Israeli soldiers injured many Palestinians during the weekly procession in Kufur Qaddoum town, east of the northern West Bank city of Qalqilia.

Morad Eshteiwi, the spokesperson of the Popular Committee against the Annexation Wall and Colonies in Qalqilia, said the Palestinians marched from the center of the town while chanting against the ongoing illegal Israeli occupation, its colonies, and constant violations. He added that this week’s procession also comes in solidarity with the Palestinian political prisoners facing constant assaults and dire living conditions in Israeli prisons.

The procession was also held to support the Palestinians in Sheikh Jarrah, facing displacement and escalating violations in occupied Jerusalem.

The soldiers attacked the procession with many gas bombs, concussion grenades, and rubber-coated steel bullets, causing dozens to suffer the effects of tear gas inhalation.

The Palestinians have been holding weekly processions for the last eighteen years, demanding the army to reopen the village’s main road the soldiers blockaded to allow easy access to the illegal colonizers, driving to and from Kedumim illegal colony, built on stolen Palestinian lands.