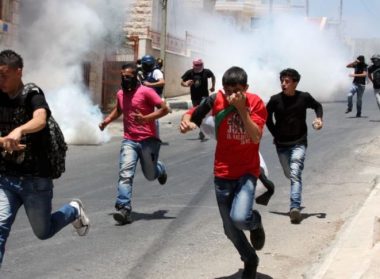 Israeli soldiers invaded, on Sunday evening, Beit Ummar town, north of the southern West Bank city of Hebron, and fired many gas bombs, during clashes that took place with local youngsters, causing many Palestinians to suffer the severe effects of teargas inhalation.

Mohammad Awwad, media spokesperson of the Popular Committee in Beit Ummar, said several military vehicles invaded the ath-Thaher area, near Karmie Tzur illegal colony, south of the town, and clashed with youngsters who hurled stones at the military jeeps.

He added that the soldiers fired many gas bombs causing many Palestinians, including some in their own homes, to suffer the severe effects of teargas inhalation.

The soldiers also closed the main road leading to the town, and fired many live rounds at an electricity transformer, causing power blackouts in several parts of the town.