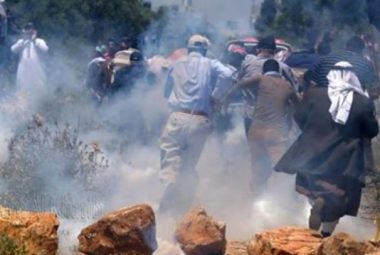 The procession started from the center of the village, before the locals, accompanied by international peace activists, marched towards the isolated Palestinian orchards, while chanting against the ongoing illegal occupation, its colonies and the Annexation Wall.

They also marched in solidarity with the al-Khan al-Ahmar Palestinian community, near Jerusalem, facing displacement and demolition by the Israeli authorities, to replace it with illegal colonies.

The protesters also called for the release of local activist, Tha’er Amira, who is held under arbitrary Administrative Detention orders without charges or trial since he was taken prisoner in April of this year, and was recently slapped with another order for four additional months.

The soldiers attacked the protesters near the eastern gate of the Annexation Wall, and fired many gas bombs and concussion grenades at them.

Medical sources said one Palestinian was injured in his ankle while trying to avoid the gas bombs, and many others suffered the effects of teargas inhalation.

In related news, the soldiers injured dozens of Palestinians holding a nonviolent protest in Ras Karkar, and in Bil’in villages, west of Ramallah, in central West Bank.