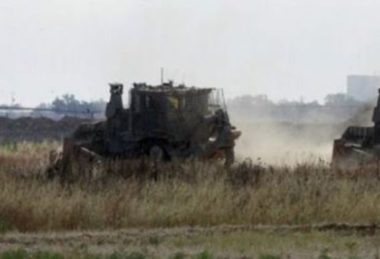 Media sources said six armored military vehicles, including two D9 bulldozers, came from a military base across the fence and invaded the Palestinian lands.

They added that the soldiers bulldozed several sections of the invaded lands and installed land hills near the fence in the southeastern area of Gaza city.

During the invasion, the soldiers fired live rounds and smoke bombs to prevent the Palestinians from entering their lands.

In related news, the soldiers abducted Husam Abu Younis, from Khan Younis, in the southern part of the coastal region, while crossing the Erez (Beit Hanoun) Crossing in northern Gaza.