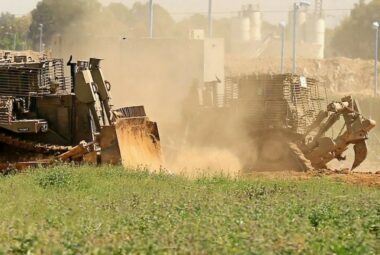 On Tuesday, several Israeli military vehicles invaded Palestinian lands near the perimeter fence east of the Central District on the besieged Gaza Strip and bulldozed them.

Media sources said five military armored vehicles, including two bulldozers, left the military base across the fence and advanced into the Palestinian lands east of Deir Al-Balah.

They added that before withdrawing, the army bulldozed lands, installed sand hills near the fence, and destroyed property, including agricultural sheds.

About ten days ago, the soldiers fired many live rounds and gas bombs at Palestinian farmers near Khan Younis, in the southern part of the Gaza Strip, causing many to suffer the effects of tear gas inhalation.