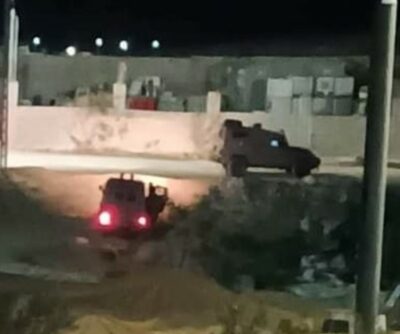 On Tuesday evening, Israeli soldiers abducted a Palestinian father and two of his sons in the Al-Obeydiyya town east of Bethlehem in the occupied West Bank.

Mohammad Radayda, the Mayor of Al-Obeydiyya, said the soldiers surrounded the home of Ali Thaher Abu Sarhan, 55, before storming and ransacking it, causing damage.

Radayda added that the soldiers abducted Ali and two of his sons, Baha’ and Bassel, both in their twenties, and took them to an unknown destination.

The soldiers also surrounded the neighboring home of Mohammad Younis Rabay’a before storming and ransacking it.

On Tuesday dawn, Israeli soldiers abducted thirteen Palestinians, including four siblings, from their homes in several parts of the occupied West Bank.