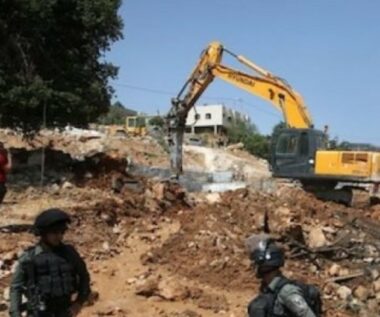 He added that the soldiers also invaded Azzoun town, east of Qalqilia, and handed Abdul-Malek Fuad Rayyan a similar order.

In Jinsafut village, east of Qalqilia, the soldiers bulldozed and uprooted farmlands, owned by Morad Aref Bashir, in the Jabal ath-Thieb area, in the eastern part of the village.

The bulldozed lands in Jabal ath-Theeb are 1.5 Dunams, part of 50 Dunams owned by Bashir, and are threatening by the illegal Israeli annexation due to constant Israel attempts to expand the illegal Emmanuel colony, which was built on stolen Palestinian lands owned by the residents of Jinsafut, and Deir Istiya in the Qalqilia governorate.