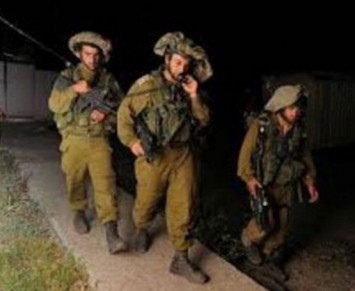 Israeli soldiers kidnapped, on Sunday at dawn, at least nine Palestinians, in different parts of the occupied West Bank, including five of in the southern West Bank district of Hebron, while four Palestinians were kidnapped, in occupied Jerusalem, on Saturday at night.

The PPS added that the soldiers also invaded Mrah Rabah village, south of Bethlehem, searched several homes and kidnapped one Palestinian, identified as Ahmad Qassem Sheikh, 53, in addition to summoning Yasser Ali Sheikh for interrogation in the Etzion military base, south of city.

The army also invaded Silwad town, east of the central West Bank city of Ramallah, and kidnapped one Palestinian, identified as Abdul-Hameed Hamed, after forcing him in one room, and interrogating him.

Hamed is the brother of Mojahed, a Palestinian political prisoner who was sentenced by an Israeli military court to nine years’ imprisonment.

In addition, the soldiers kidnapped five Palestinians from the southern West Bank city of Hebron, and Beit Ummar town, north of the city, after invading and searching many homes, causing property damage.

In Beit Ummar town, north of Hebron, the soldiers stormed and searched many homes, kidnapped Rashed Yousef Awad, 17, and summoned Hamza Ali Awad, 20, for interrogation in Etzion base.

In addition, the soldiers kidnapped Dergham Mohammad Bisharat from Tammoun town, south of the Tubas, after stopping him at the Jaba’ roadblock, southeast of Ramallah.

It is worth mentioning that, on Saturday evening, the soldiers kidnapped three Palestinians, identified as Jihad Sa’diyya, Fahd Shalabi and Areen Za’anin, from Wadi al-Jouz neighborhood, in occupied Jerusalem.

The soldiers also assaulted a young man, identified as Ala’ Haddad, in Sur Baher village near Jerusalem, and detained him in an interrogation center before he lost consciousness, and was moved to a hospital.