Israel To Demolish Many Palestinian Homes In Silwan 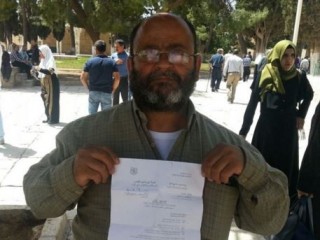 Dozens of Israeli soldiers and police officers invaded, on Friday and Saturday, several neighborhoods in Silwan town, in occupied Jerusalem, and handed demolition orders against many Palestinian homes.

The Wadi Hilweh Information Center in Silwan (Silwanic) in Jerusalem said the soldiers invaded the home of Yassin Rajabi, and handed him a demolition order targeting the home he built twenty years ago, and is living in it with his eight family members.

The soldiers also ordered Rajabi to remove a poster of his son, who was recently released from an Israeli detention facility, and threatened to kidnap him again.

Silwanic also said that the soldiers handed a similar order to Mohammad Talal Haleesy; the property is 110 square/meters, and is composed of three rooms, bathrooms and toilet rooms, and was built in November of 2014.

On Friday, the soldiers handed demolition notices against eighteen Palestinians homes, built many years ago, in the al-Bustan neighborhood in Silwan, Fakhri Abu Diab of the Jerusalem Land Defense Committee said.

The families have been paying high fines to the Jerusalem City Council in an attempt to prevent the demolition of their homes, including legal costs and permit applications.

While Israel largely denies Palestinian families construction permits in the occupied city, it is ongoing with its plans, and actual construction and expansion of illegal colonies, built on Palestinian lands, in and around occupied Jerusalem.

Expanding Palestinian families in Jerusalem face constant obstacles, and high costs, just to apply for construction permits, and are also largely unable to add rooms to their existing homes and properties.