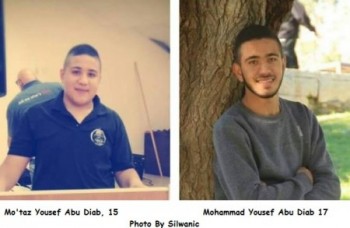 The Wadi Hilweh Information Center in Silwan (Silwanic) said many soldiers stormed the home of Yousef Abu Diab, in Ein al-Louza neighborhood, and kidnapped his two children, identified as Mo’taz, 15, and Mohammad, 17.

Silwanic added that dozens of soldiers invaded the neighborhood, and clashed with local youngsters, who hurled stones and empty bottles on them, while the army fired many rubber-coated steel bullets, gas bombs and concussion grenades.

On Monday morning, the soldiers kidnapped one Palestinian in the southern West Bank city of Hebron, and confiscated gold and cash from an invaded home in Beit Ummar town, north of Hebron.

Also on Monday morning, the army soldiers closed the main entrance of the Hebron Emergency Center, run by the Hebron Health Committees, by placing concrete blocks, completely sealing it, and deployed dozens of soldiers on its rooftop.

In the West Bank district of Bethlehem, the soldiers invaded the School Streets, in the al-Khader town, south of Bethlehem city, and tried to invade some schools. The teachers managed to accompany many students from the center of the town to their schools, with the help of volunteers from international churches.