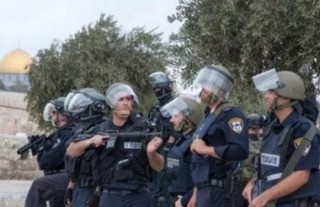 Israeli soldiers kidnapped, on Monday evening, an elderly Palestinian man, a woman and two young men, in the town of al-‘Isawiyya, in occupied Jerusalem, and took them to interrogation centers in the city.

He added that the soldiers also kidnapped a Palestinian woman, identified as Safa’ Jarrah Nasser, from Abu Ryala neighborhood.

The invasion and abductions led to clashes between the soldiers, who fired rubber-coated steel bullets and gas bombs, and local youngsters, who hurled stones and empty bottles on them.

In addition, undercover soldiers of the Israeli army infiltrated, late on Monday evening, into a coffee shop in al-‘Isawiyya, and kidnapped a young man, identified as Fadi Darweesh.

The undercover forces have been invading homes and stores in the town, every night for the last several days, in addition to frequent abductions and assaults targeting Palestinian youngsters.

In related news, several army vehicles invaded the al-‘Ezariyya town, southeast of Jerusalem, stormed and searched many homes and shops.

The soldiers also fired many flares in Jabal al-Mokabber neighborhood, southeast of Jerusalem, and briefly detained a young man in the Shayyah area.