Army Kidnaps Four Palestinians, Including A Child, In Jerusalem 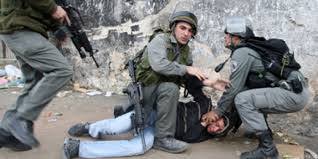 Israeli soldiers have kidnapped, on Tuesday at dawn and on Monday evening, four Palestinians, including a 12-year-old child  in occupied East Jerusalem. The army claims the three other Palestinians  are from Nablus, and “planned to carry out an attack in Jerusalem.”

The Wadi Hilweh Information Center in Silwan (Silwanic) in occupied Jerusalem, said the soldiers invaded the town, south of the Al-Aqsa Mosque in Jerusalem, and kidnapped a child.

Silwanic stated that the soldiers kidnapped Adam Jibreel Salaima, only 12 years of age, while heading to school in Ras al-‘Amoud neighborhood.

The soldiers also chased many schoolchildren in Ayman al-‘Abbassi Street,  pushing most of them to seek shelter in nearby Palestinian homes. Adam was kidnapping after the soldiers invaded some of these homes.

Silwanic said that dozens of soldiers invaded the town, and were extensively deployed in various neighborhoods while scores of settlers, living in a number of illegal outposts in the town, celebrated in the streets.

In addition, the soldiers harassed many children walking to school, in the Schools Street, in Ras al-Amoud, and fired sound bombs and rubber-coated steel bullets.

They added that the three Palestinians were “illegally staying in Jerusalem”, and were allegedly “planning an attack in the city”. They were moved to a detention center for interrogation.