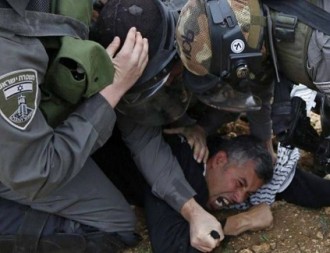 Israeli soldiers invaded, on Tuesday at dawn, the town of Beit Ummar, north of the southern West Bank city of Hebron, searched homes and kidnapped a former political prisoner.

The sources identified the kidnapped Palestinian as Abdul-Rahman Nayef Sleibi, 20; a former political prisoner who was previously held by Israel.

Sleibi was handcuffed and blindfolded, before the soldiers forced him into one of their vehicles and took him to the Etzion military base, north of Hebron.

On Tuesday at dawn and on Monday evening, the soldiers kidnapped four Palestinians in occupied East Jerusalem.

Soldiers Abduct A Palestinian, Confiscate 150.00 Shekels From His Home