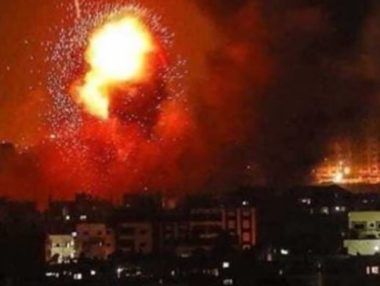 The Palestinian Health Ministry has confirmed that Israeli soldiers fired a shell, on Sunday evening, at Palestinians, near the perimeter fence area, between Khan Younis and Deir al-Balah, in the Gaza Strip, killing three children.

It added that the three children, are from Wadi al-Salqa area, in Deir al-Balah governorate, in central Gaza.

Media sources in Gaza said, unlike the military claims, the children were only laying bird traps on Palestinian lands when the army fired shells at them,

Updated From:  The Palestinian Health Ministry has confirmed that Israeli soldiers fired a shell, late on Sunday evening, three children between the ages of 12 and 14,  near the perimeter fence area, between Khan Younis and Deir al-Balah, in the Gaza Strip.

Dr. Ashraf al-Qedra, the spokesperson of the Health Ministry in Gaza said medics of the Red Crescent initiated a search campaign on foot, to locate the three slain Palestinians, and added that the medics eventually located their mutilated remains.

Dr. al-Qedra called on the media, and the Palestinians on social media outlets, to wait until the three are officially identified and all notifications are made before publishing any information about them.

He added that after many ambulances, medics and medic volunteers arrived at the area to search for the remains of the slain Palestinians. After locating them, the ambulances moved the mutilated remains to the Al-Aqsa Hospital, in Deir al-Balah, in central Gaza.

The Israeli army claimed that its soldiers “targeted Palestinians, who were attempting to place an explosive object near the border fence,” to targeted military vehicles driving there.

The  three Palestinian children were killed in Palestinian lands near the perimeter fence, and did not cross it.”