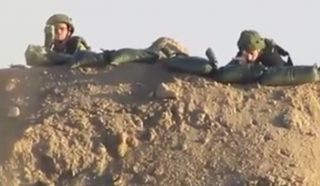 Israeli soldiers, stationed across the border fence, fired several live rounds, on Thursday morning, on Palestinian farmers and their lands, in central Gaza and in the southern part of the coastal region.

The WAFA Palestinian News Agency has reported that the soldiers, stationed on military towers southeast of Deir al-Balah city, in central Gaza, fired dozens of live rounds into Palestinian farmlands, as the residents were trying to enter them, forcing them to leave in fear of further escalation.

WAFA added that the soldiers, stationed on military towers across the border fence east of the al-Qarara town, northeast of Khan Younis, in the southern part of the coastal regions, also fired dozens of live rounds into Palestinian lands.

The soldiers conduct daily violations against the Palestinian farmers who are trying to enter and work on their lands in border areas, in the northern and eastern parts of the Gaza Strip, in addition to the constant attacks targeting Gaza fishers in Palestinian territorial waters.