Israeli Soldiers Kidnap Three Palestinians In Bethlehem, One In Qalqilia 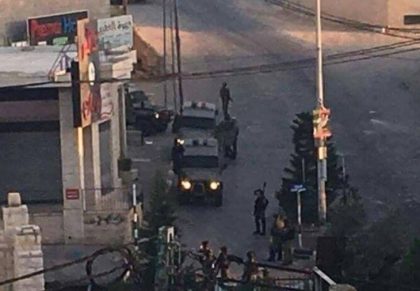 Media sources in Bethlehem city said several Israeli army vehicles invaded it, and kidnapped Abdul-Basset Mohammad Shahin, after storming his home and searching it, in the al-Karkafa area.

The soldiers also invaded Deheishe refugee camp, and clashed with dozens of local youths who hurled stones and empty bottles at the military vehicles, while the army fired gas bombs and concussion grenades.

In addition, the soldiers stormed and searched several homes in the refugee camp, and kidnapped one Palestinian whose identity remained unknown until the time of this report.

They also summoned another Palestinian, identified as Khaled Ziyada for interrogation in the Etzion military base, south of Bethlehem.

Also in Bethlehem, the soldiers invaded the al-Khader town, south of the city, and kidnapped a young man, identified as Mohammad Omar Salah, after storming his home and searching it.