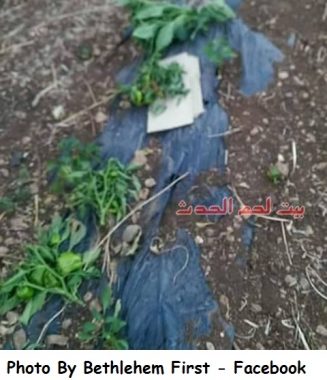 Ahmad Sukkar, the head of Wadi Fukin Village Council, told the WAFA Palestinian News Agency that the fanatics infiltrated into Palestinian farmlands, in the al-Fawwar area, south of the village, and destroyed two hothouses, in addition to uprooting dozens of plants, owned by Maher Assaf and Jamil Assaf.

Sukkar added that the assailants also uprooted plants in lands owned by Mohammad Saleh Assaf and Na’im Daoud ‘Ateyya, in addition to writing racist graffiti, including “death to Arabs.”

He also stated that the village has been subject to frequent similar assaults, carried out by extremists of the nearby Beitar Illit colony, illegally built on Palestinian lands owned by residents of Husan, Nahhalin and Wadi Fukin.