Ki-moon: “Israeli Settlements Are Illegal, A Serious Threat To A Viable Palestinian State” 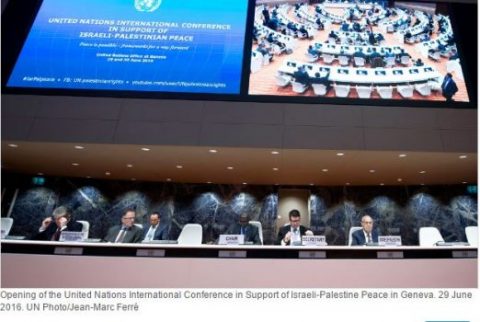 His statements came in a message delivered by Michael Moeller, Director-General of the UN Office at Geneva (UNOG), during the United Nations International Conference in Support of Israeli-Palestine Peace.

“During my trip, I reminded the leadership on both sides of the imperative of taking prompt action to restore hope in a peaceful future and to preserve the Two-State solution – the only way to meet the national aspirations of both peoples,” Ki-moon said in his message.

The official also said that Israel’s settlement activities in Area C of the occupied West Bank are very troubling, especially since Area C (more than 60% of the West Bank) is under the full control of the Israeli army, and its “Civil Administration Office.”

Area C is an important part of the West Bank, with various hills, meadows, and natural resources, but is almost exclusively used by Israel for its settlement activities, and military control.

[Israel strictly limits Palestinian settlement, construction and development in Area C, while ignoring the needs of the Palestinian population. This policy means Palestinian residents must subsist in very rudimentary living conditions. They are denied any legal avenue to build homes or develop their communities, so they face the constant fear that their homes might be demolished, and that they be expelled and lose their livelihood] B’Tselem – The Israeli Information Center for Human Rights in the Occupied Territories

He added that Israel’s construction and expansion of its colonies in the West Bank and Jerusalem “undermine trust and constitute a significant threat to a viable Palestinian State,” and added that the “Palestinian leadership must live up to its responsibility to speak clearly and act firmly against violence and incitement.”

In addition, the UN Chief said that the United Nations remains committed to supporting the two-state solution, based on “negotiated, just, comprehensive and enduring solution for the people of Israel and Palestine.”

The United Nations said the conference, which is convened by the UN Palestinian Rights Committee, brings together “experienced peace negotiators, international experts, including from the UN, Israel and Palestine, civil society and academics, to discuss lessons learned from past initiatives related to the Israeli-Palestinian peace process and assess recent initiatives by key actors.”

The UN chief also stressed the importance of the efforts meant to gather international consensus for the resumption of direct peace talks, especially amidst France Conference, and the upcoming report of the Quartet Committee.

He urged both the Palestinian and Israeli leaderships to conduct all needed and urgent measures to prepare for what he called “a peaceful future, based on the two-state solution.”