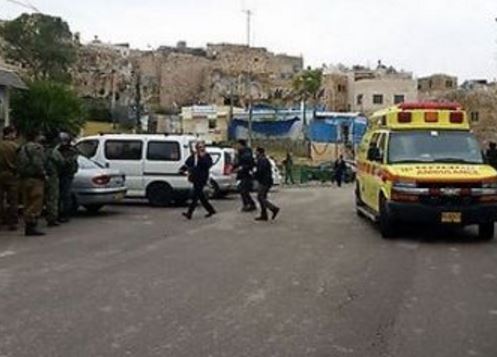 Updated: Israeli sources said the Israeli child, who was injured in the Thursday morning stabbing attack, in Kiryat Arba’ settlement in Hebron, died from her wounds.

It added that, according to an initial army investigation, the Palestinian jumped the settlement fence before entering a home and stabbed the 13-year-old girl while she was still asleep in her bed.

The Palestinian Health Ministry the Palestinian, who reportedly carried the attack out, has been identified as Mohammad Nasser Mahmoud Tarayra, 17, from Bani Neim town, east of Hebron.

Israeli Ynet News said the slain Israeli child has been identified as Hallel Yaffe Ariel, 13, and added that the Palestinian stabbed her, initially causing a serious injury.

It added that the Palestinian climbed over the security fence surrounding Harsanina neighborhood before infiltrating the house, close to the settlement fence.

She suffered various stab wounds all across her upper body, and died in Shaare Zedek Medical Center, in Jerusalem.

It is worth mentioning that Israeli soldiers assaulted Al-Jazeera Crew, allegedly for filming in a “closed military zone,” and kidnapped cameraman Labeeb al-Jazmawi, and Elias Karram.

Karram was released later, but the army refused to release al-Jazmawi.

Mohammad is related to Yousef Waleed Tarayra, who was killed by the Israeli army, on March 14, 2016, allegedly after he tried to ram soldiers with his car. Palestinian medics rushed to the scene, but the army closed the area and prevented them from approaching him, and he bled to death. The autopsy showed “overkill” by the soldiers.

Israeli soldiers shot and killed, on Thursday morning, a young Palestinian man in Kharsina illegal Israeli settlement, east of Hebron city, in the southern part of the occupied West Bank, allegedly after he stabbed and injured two settlers.

According to the Israeli army, the young man infiltrated the settlement and stabbed the two settlers, causing a very serious injury to one of them, before he was shot dead.

Israeli daily Haaretz has reported that two Israelis were injured, one of them is a teenage girl, who was wounded in her upper torso, when the Palestinian infiltrated Kiryat Arba settlement block and entered a settlers’ home before stabbing her as she was sleeping.

Haaretz added that security guards of the settlement rushed to the home and broke its door, before the Palestinian stabbed one of them in the face, while another guard opened fire, and killed him.

The wounded guard suffered a serious injury, before he and the girl were moved to Israeli hospitals in Jerusalem.

The Palestinian Health Ministry has reported that the Palestinian was seventeen years of age and that it was informed of his death by the army, but his name remained unknown until the time of this report.

It is worth mentioning that Israeli reports were initially conflicted, as some claimed the Palestinian infiltrated into the settlement and opened fire on the settlers, and later said he carried out a stabbing attack.

Following the attack, the army removed all Palestinian workers from the settlements and all nearby settlements.