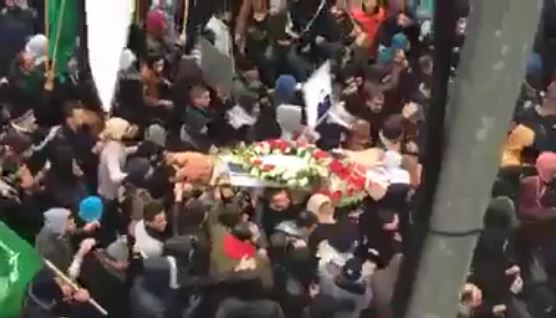 The Head of the General Prosecutors’ Office in Hebron Ashraf Mashal has reported that autopsies performed on the three Palestinians, who were killed by the Israeli military on Monday in Hebron, revealed that the soldiers fired an excessive number of bullets into the Palestinians, even after killing them.Several similar incidents, captured on video, reveal a systematic policy of executions that include the use of ‘overkill’, firing numerous additional bullets into Palestinians who were already dead.

Mashal told a Maan News Agency correspondent in Hebron that the Forensic Department head in the southern part of the West Bank, Ashraf al-Qadi, as well as General Prosecutor Majdi Reb’ey and Deputy prosecutor Fuad al-‘Awawda, attended the autopsy.

The three Palestinians who were killed by the Israeli forces in two separate incidents on Monday are Qassem Farid Jaber, 31, Amir Fuad al-Juneidi, 22, and Yousef Waleed Tarayra, 18.

These deaths are similar to various previous incidents when the army, or paramilitary Israeli settlers, not only fired an excessive number of bullets, but actually executed the Palestinians after already shooting and completely incapacitating them.

One of the most recent similar cases, is the fatal shooting of Mohammad Abu Khalaf, 20 years of age, who was killed in occupied Jerusalem, on February 19, 2016, and his death was caught on tape by Al-Jazeera.

The video shows how Abu Khalaf was first shot with two live rounds, followed by dozens more shots after he was already injured and bleeding on the ground.

The Qatar-based Al-Jazeera crew in occupied Jerusalem said they witnessed the execution.

The Al-Jazeera crew was filming a documentary in the area when the shooting took place right behind them, and shifted the focus of the camera on the unfolding events, capturing the horrific execution of the Palestinian with many bullets after he was already shot and incapacitated.

Another case was the fatal shooting of Hadeel Wajeeh ‘Awwad, 16, from the Qalandia refugee camp, north of occupied Jerusalem, who was shot and killed, on November 23, 2015, after she and her friend attempted a stabbing attack.

Her death, and the serious injury of her friend, was captured on surveillance video, where it clearly shows that after they were both shot and struck, and were disabled on the ground, the armed Israelis repeatedly shot them, killing Hadeel and seriously wounding her friend.

A similar case of execution is the incident that led to the death of Mahdi Mohammad Ramadan al-Mohtasib, who was killed by the army on October 29, 2015, in Hebron city, in the southern part of the occupied West Bank.

The video of his execution clearly shows how Al-Mohtasib was first shot and wounded, and was already on the ground in pain, when a soldier approached him and fired a second deadly shot.