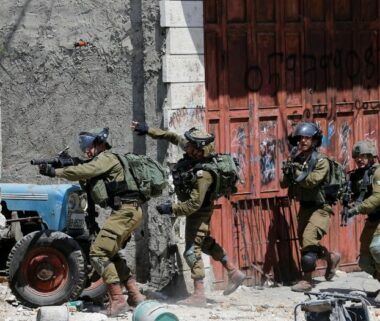 On Thursday, Israeli soldiers shot a young Palestinian man during protests that took place when the army invaded Nabi Saleh village, northwest of Ramallah, in the central part of the occupied West Bank.

Media sources said the protests, ongoing at the time of this report, were attacked by dozens of soldiers who fired live rounds, rubber-coated steel bullets, gas bombs, and concussion grenades.

They added that the soldiers shot a young man with a live round in the thigh, causing excessive bleeding.

The young man lost consciousness due to serious blood loss before Palestinian medics rushed him to a hospital in Ramallah.

It is worth mentioning that, on Wednesday night, the soldiers closed the village’s main entrance with concrete blocks, leading to protests after the army prevented the Palestinians from entering or leaving it.

Also, the soldiers seriously shot a Palestinian teenage boy and abducted five Palestinians during protests in Hebron, in the southern part of the occupied West Bank.