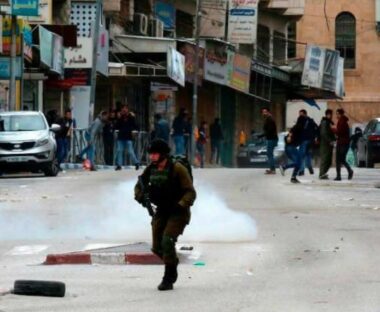 On Thursday evening, Israeli soldiers injured seven Palestinians during protests in Beit Ummar town, north of Hebron, in the southern part of the occupied West Bank.

The Palestinians were marching against the serious Israeli escalation across the West Bank when the soldiers attacked them with live fire, gas bombs, and concussion grenades.

Medical sources said the soldiers shot seven Palestinians, including four who suffered gunshot wounds to their legs before they were rushed to a hospital in Hebron; three Palestinians were shot with rubber-coated steel bullets and received treatment at a local clinic.

The army also attacked protesters at Hebron’s northern entrance near Halhoul Bridge and the main entrance of Kharsa village.

The soldiers also stopped and searched a Palestinian car eastern entrance of Halhoul bridge and abducted one Palestinian.

In related news, the soldier caused many Palestinians to suffer the effects of tear gas inhalation after the army invaded Husan village, west of Bethlehem city, and attacked protesters with gas bombs and concussion grenades.