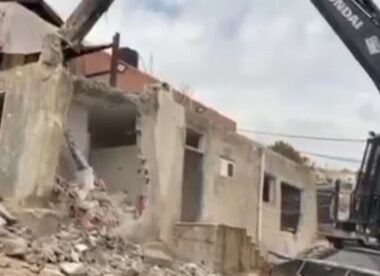 On Thursday, the Israeli army issued demolition orders targeting two flats and a room in Ya’bad town, west of Jenin, in the West Bank’s northern part.

Ahmad Hasan Hamarsha told WAFA Palestinian News Agency that the soldiers invaded the town and handed him an order for the demolition of two flats and a room in a building owned by his family.

Hamarsha said the army informed the family that they should demolish the buildings before May 26th or face excessively high fines and fees.

The family recently filed an appeal through a human rights group in occupied Jerusalem before an Israeli court only revoked the demolition order of two commercial rooms on the ground floor of the building.

Analysis by the Israeli Committee Against House Demolitions (ICAHD) revealed that, in the year 2021, the Israeli occupation authorities demolished 937 structures, displacing 1119 Palestinians and directly affecting 12658.

It added that, in the Negev, the Israeli authorities demolished 3004 structures: 431 homes and 2553 agriculture and livelihood structures.