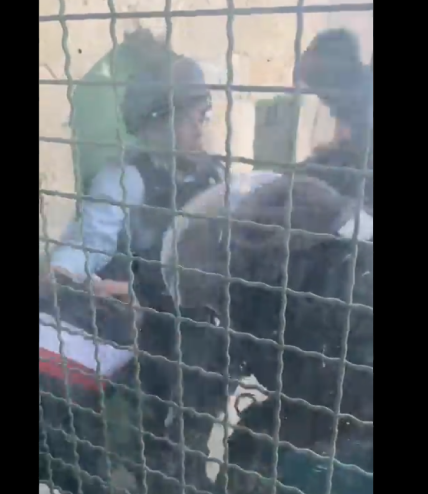 Another Anadolu Agency correspondent in Jerusalem, Esat Firat, was injured Monday after being attacked by the Israeli police at Al-Aqsa Mosque complex.

While covering the events on the complex, a stun grenade thrown by the Israeli police hit Firat, causing bleeding in the right side of his abdomen.

Firat was the third Anadolu Agency journalist attacked by the Israeli police. Earlier, two photographers were targeted while they were covering the Israeli forces’ attacks on worshipers at Al-Aqsa Mosque.

Abu Rumaila said he was doing his job at Al-Aqsa Mosque in the morning before heading to a field clinic to photograph Palestinians injured during the clashes.

“Israeli police forces stormed the clinic and attacked us brutally,” he said, noting that he had bruises all over his body.

Israeli forces “put me in a corner and assaulted me with rifle butts, batons, hands and legs … and threw me under their feet on the ground,” the photojournalist recalled.

Abu Rumaila continued: “The soldiers kept assaulting me until an officer came and took me from their hands … I told them that I am a journalist, but they kept beating me everywhere.”

For his part, Mustafa Kharouf, another Anadolu Agency photojournalist, said he was hit by a rubber bullet in the chest while he was providing aid to an injured medic.

Kharouf said Israeli forces pushed them outside the Al-Aqsa Mosque, adding that when he left Jerusalem’s Old City and headed towards his vehicle near the wall of Al-Rahma Cemetery, he found a medic injured by a stun grenade shrapnel.

“The injured paramedic was lying next to his car, so I tried to fulfill the humanitarian call and provided aid to him,” Kharouf said.

“I began calling for paramedics near him to rescue their wounded colleague until a soldier shot me with a rubber bullet in my chest,” he said.

Anadolu Agency has issued a statement calling on Israel to respect human rights and internationally-recognized protections on journalists.

“Our cameraman Fayez Abu Rumaila was attacked by Israeli police while he was recording the injustices taking place in Jerusalem,” Karagoz said.

“I urge Israeli officials to act with respect for human rights, the law, and journalism,” he stressed.

On Monday morning, the Israeli police forces stormed the courtyards of the Al-Aqsa Mosque and attacked Palestinian worshippers inside the compound.

More than 305 Palestinians were injured in the attacks, according to the Palestinian Red Crescent.

Hundreds of Palestinians had gathered inside the Al-Aqsa Mosque compound at dawn to prevent Israeli settlers from storming the holy site.

Extremist Jews have called for storming Al-Aqsa Mosque to celebrate the anniversary of the Six-Day War in 1967, when Israel occupied East Jerusalem, as “Jerusalem Day” according to the Hebrew calendar.

Al-Aqsa Mosque is the world’s third-holiest site for Muslims. Jews call the area the “Temple Mount,” claiming it was the site of two Jewish temples in ancient times.

Israel occupied East Jerusalem, where Al-Aqsa is located, during the 1967 Israeli invasion of the West Bank and Gaza Strip. It annexed the entire city in 1980, in a move never recognized by the international community.