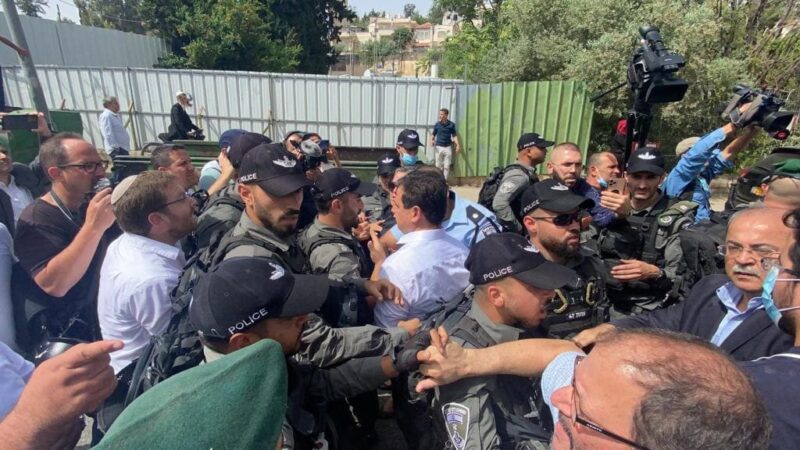 Early Monday morning, a group of Israeli paramilitary settlers and two right-wing Knesset (Parliament) members invaded the besieged Palestinian neighborhood of Sheikh Jarrah in East Jerusalem, accompanied by a battalion of Israeli military troops. The soldiers assaulted Palestinian residents and solidarity activists who have been in the neighborhood for the past week attempting to protect it from being demolished by Israeli authorities.

Eyewitnesses reported that Israeli forces and police accompanied the paramilitary settlers and right-wing Knesset members, who have repeatedly voiced their objective of cleansing the neighborhood of its Palestinian residents in order to move Israelis into the area. The settlers and troops then attacked the Palestinians and solidarity activists who stood in the path of the invasion, and abducted three family members: Hashem al-Salaymeh, his son and daughter.

Al-Salaymeh was in front of his home with his family, and the Israeli settlers tried to enter his home. The Israeli soldiers beat him on his face and head, causing multiple injuries, then abducted him along with his children.

Umm Samir Abdel-Latif, the owner of one of the threatened houses, said that the Israeli occupation will not succeed in evacuating them from their homes. She told reporters, “We have been living in this house for 70 years, and they are trying to force us out, but we will not leave our homes.”

In the same context, Israeli forces assaulted Palestinian youth near the Lions Gate leading to the Al-Aqsa Mosque in the Old City of Jerusalem Monday morning, abducting one of them., and arrested one of them.

Local sources reported that the Israeli troops attacked the youth in Bab Al-Ghazali Square, and after abducting one, began preventing anyone under age 18 from entering Al-Aqsa.

These attacks come in the last three days of the holy month of Ramadan, celebrated by Muslims worldwide as a time of fasting, prayer and reflection. It is a time when many Muslims try to go to the al-Aqsa Mosque, which is the third-holiest site in Islam. But Israeli forces have prevented thousands of Palestinian Muslims from entering the mosque during their holy days, and on Sunday assaulted and wounded hundreds of people who were inside a mosque in the al-Aqsa complex in Jerusalem.

Sheikh Jarrah neighborhood has been very tense in the last weeks following concern over Israel’s forced eviction of the Palestinian residents in order to turn over their homes to Jewish settlers.