In the village of Kisan, east of Bethlehem, the Israeli government on Thursday approved the theft of 49,000 dunams (21,000 acres) of village land – stretching from the oustkirts of the city of Bethlehem on the west all the way to the Dead Sea on the east.

Instead, the Israeli authorities simply dismissed the claims of the landowners and said that the land in question would be transferred to Israeli “state ownership”.

According to Israeli sources, the Israeli authorities plan to turn the area into a so-called “nature reserve” in order to expand Israeli development on the land.

By declaring it a “nature reserve”, they would be allowed by the Israeli government to expand Israeli kibbutzim (agricultural developments under the control of the Israeli Ministry of Agriculture).

Thursday’s decision to go ahead with the land confiscation will mean that the Israeli colony of “Ibi Hanahel”, which is built on the lands of Kisan village, will be expanded. The sheds, containers and agricultural barns will be expanded for the benefit of the Jewish Israeli settlers, while the Palestinian farmers will be forcibly displaced from their ancestral land.

Even though multiple united Nations resolutions have condemned the Israeli confiscation of  Palestinian land by force, the Israeli government has flaunted these resoltuions and refused to adhere to them.

In Kisan, local sources report that since the beginning of 2022, work has begun on a section of the confiscated lands in order to expand the southeastern side of the colonial settlement, while the process of preparing the land and preparing it for construction and cultivation will intensify in the coming days.

The occupation bulldozers are already razing large areas of Kisan lands, especially in the “Bir al-Mazrab” area south of the village, to expand construction inside the “Ibi Hanahel” settlement, which will be inhabited next summer by 21 new settler families.

According to the confiscation decision, planning is underway to build an industrial area affiliated with the settlement, more than twice the size of the settlement itself.

The village of Kisan has been the subject of numerous violent assaults by Israeli paramilitary colonial settler forces, including y repeated attacks on sheep herders to drive them away from the lands, and to seize and bulldoze large parts of the village of Kisan.

The Israeli court decision also includes a section allowing the Israeli government to expand the settlement of “Ibi Hanahel” to link it to a planned road network, to expand the intended industrial zone and to build an electronic wall to protect the industrial zone, as well as linking it to the landfill for waste recycling and sorting and turning it into a factory for recycled cardboard and organic materials for the electricity generation plant from Residues and chemical fertilizers for agriculture in the west of the village, between Kisan and Minieh.

During the past three months, the Israeli military government’s bulldozers, under the protection of the Israeli occupation army, have uprooted hundreds of trees, demolished agricultural fences, and started building a settlement road, in mountainous lands overlooking Wadi al-Jahar, northwest of the village.

It is noteworthy that Kisan village lacks roads and infrastructure such as water and electricity networks, education and health, and most of its residents depend on agriculture and livestock. But now, due to the Israeli expansion of the colony of “Ibi Hanahel”, as well as “Khalat al-Qawar and al-Sahel” located adjacent to the settlements of “Amos” and Avi Menachem”, the Palestinian farmers and shepherds are unable to reach their pastures and farmlands.

The occupation forces recently began to construct and put up a fence to prevent farmers and shepherds from entering their lands.

Since 1967, the village has been subjected to successive confiscations of its lands in favor of building the settlements of “Ma’ale Amos and Mitzpe Shalem” and the outpost of “Abi Hanahel”, in addition to constructing bypass roads, in addition to building 428 dunums of land to establish an Israeli military base west of “Shalim” settlement. 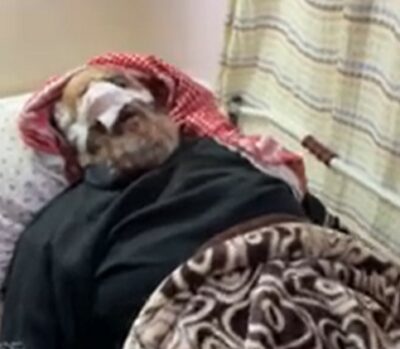 They added that the elderly man suffered fractures in addition to various cuts and bruises before he was rushed to the al-Ahli hospital in Hebron city.

The Palestinian was injured when the colonizers assaulted him and several other residents in the al-Kanoub area in Kisan.