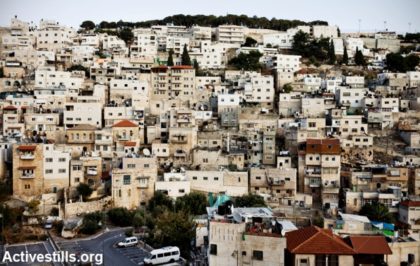 The Israeli water company Gihon cut off water to a number of Palestinian homes in the Silwan neighborhood in east Jerusalem, and on the same day issued demolition notices to several homes in the neighborhood.

The new notices come just two days after another wave of demolition notices were issued to Palestinian homeowners in Silwan.

Silwan has long been a target of Israeli authorities, who identified the neighborhood in the E1 Jerusalem plan as a target of expansion, where the Israeli government plans to expel the Palestinian homeowners and build Jewish-only settlements in their places.

202 Palestinians have been rendered homeless in East Jerusalem this year by Israeli authorities forcibly removing them from their homes and then demolishing those houses.

Palestinian homeowners are denied permits for construction close to 100% of the time, since Israel occupied Jerusalem in 1967.