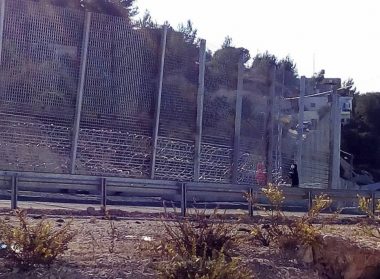 Israeli soldiers invaded, Wednesday, the al-Walaja village, northwest of the West Bank city of Bethlehem, installed barbed wires along the Annexation Wall, built on the villagers’ lands, and handed a demolition order targeting one home.

Ibrahim Awad, a local activist in al-Walaja, said the soldiers installed barbed wires along the Annexation Wall, extending from the village’s northern entrance near the Cremisan Monastery all the way to al-Hadafa Spring area.

Awad added that the soldiers also invaded Ein Jweiza area, in the northern part of al-Walaja, and handed a demolition order against a two-story home, owned by Mahmoud Mohammad Radwan, under the allegation of being built without a permit.

It is worth mentioning that the army previously issued many similar orders targeting homes in the same area; some were demolition orders, and others were orders to halt construction, which is usually the step that precedes demolition.

The wall and the illegal Israeli colonies have isolated al-Walaja from several directions, except for its road leading to Beit Jala city, and are isolating the Palestinians from approximately 3000 dunams of their lands, where the Jerusalem City Council is planning a metropolitan park for Israelis.