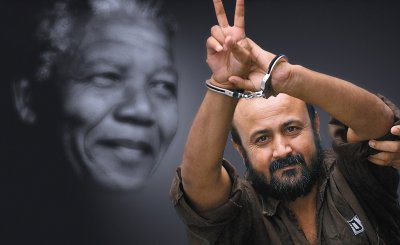 The Israeli government on Monday released a video purporting to show the leader of the Palestinian prisoners’ hunger strike sneaking food in his cell – but the video does not have a verified time stamp, does not show the face of the prisoner in the cell, and has been discounted by hunger strikers as ‘pure propaganda’.

Marwan Barghouthi, the prisoner leading the mass hunger strike, has been called the ‘Palestinian Mandela’, after the late South African President and anti-apartheid activist Nelson Mandela.

Israeli officials released a video which they claim shows Barghouthi eating food – but critics and analysts say the video is not of Barghouthi at all.

Marwan’s wife, Lawyer Fadwa Barghouthi, stated that Israeli is so desperate in its attempts to break the hunger strike, and that the fact that Israeli officials have resorted to using a fabricated video shows how desperate Israel is, and how low its leaders can get in facing the strong will and determination of the hunger striking detainees.

The hunger strike has ended its third week, with more than 1500 Palestinian prisoners entering the dangerous zone of going more than 21 days without food. Israeli officials were thwarted in their attempts to force-feed the prisoners (as the US has done for years to hunger-striking prisoners in Guantanamo Bay), when the Israeli Medical Association refused to allow its doctors to participate in the torturous practice, and the government’s attempt to secretly bring in foreign doctors was exposed to the media.

In a press conference Monday, the wife of strike leader Marwan Barghouthi, Fadwa, stated, “We are not surprised by this fake video, it is all part of Israel’s psychosocial warfare against the detainees in particular, and the Palestinian people in general.”

She said, “We also know how low Israel can get, and all of its dirty games, manipulations and the blackmail of the families of the detainees.” She added that Marwan has been subject to an extensive Israeli campaign aiming at delegitimizing him and his key role, including forcing him in solitary confinement for three years of the fifteen years since he was abducted and imprisoned.

“Denying Marwan, and all hunger striking detainees, the right to meet their lawyers during the strike, which started on April 17th, is just another Israeli attempt to keep the detainees away from public opinion and the media,” Fadwa stated, “Israel’s conduct is similar to what criminals do when they try to conceal their crimes – if the state of Israel has nothing to hide, then why are the detainees denied access even to their own lawyers, and deprived from all forms of communication from the outside world, including their families?”

Fadwa said that publishing this fake, fabricated video only shows Israel’s defeat in countering the battle of empty stomachs that the detainees are engaging in – she said that it just shows how weak Israel and the Israeli occupation are, and how strong is the will and the determination of the detainees.

For his part, the head of the Palestinian Prisoners Society (PPS) Qaddoura Fares, said the fake video did not come as a surprise, especially while the hunger strike continues and escalates, amidst extensive public support.

He added that the media outlets that published this video as if it is a proven fact, only represent Israel, and its illegal policies and violations against the detainees.

Fares also challenged Israel to allow a lawyer, even an Israeli lawyer, or a representative of the Red Cross, to visit with Barghouthi and examine him, and added that Israel will never do so because its lies will be revealed to the entire world.

“Israel knows that the detainees are winning, especially in this delicate stage of their strike,” he said, “The only thing this video proves is how desperate Israel is.”

The Palestinian official stressed that the lives of more than 1500 hunger striking detainees are at real risk, and called for extensive local, regional and international support.