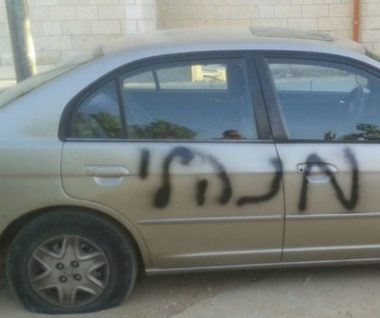 An unknown number of Israeli fanatic extremists infiltrated, on Tuesday at dawn, the as-Sahl neighborhood in Shoafat town, north of occupied East Jerusalem, and wrote racist graffiti in Hebrew on Palestinian cars and buildings. The graffiti included insults against the Muslim Prophet Mohammad. The vandals also slashed car tires.

Besides the insults against the Prophet Mohammad, the vandals also wrote ‘Pricetag’ and ‘Revenge’. They punctured the tires of 17 cars belonging to members of the families of Issa, Abu Zahara, Abu Khdeir, al-Mashni, Khaddor, Abdul-al, and D’eis.

Local resident Morad Issa said that surveillance cameras captured the images of two Israeli settlers infiltrating into the neighborhood at about 3:15 am. The cameras showed the pair writing graffiti on the walls and on a car. The term “price tag” has been used in association with hate crimes against Palestinians, carried out by right-wing Israeli perpetrators.

Also on Tuesday morning before dawn, a Palestinian village in northern Israel, Na’ura, experienced a similar spate of graffiti and tire slashings, likely carried out by the same perpetrators. There, eight cars had their tires slashed, and the words “administrative price tag” and “administrative revenge” were spraypainted on buildings.

The addition of the word “administrative” is speculated to be a reference to administrative detention, a practice of holding prisoners without charges for lengthy terms. In the past, it was only used for Palestinians, but in the past year an Israeli settler leader and several other right-wing Israeli suspects were held without charge in connection to an arson attack that killed a Palestinian family asleep in their beds.