Israel Bills A Jerusalemite Palestinian After Demolishing His Home 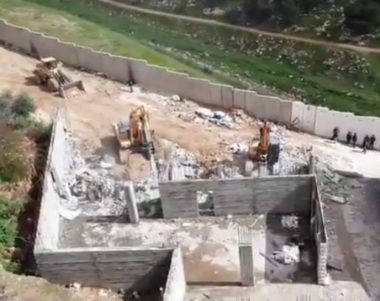 Hours after the Israeli Authorities in occupied East Jerusalem demolished a Palestinian home in Shu’fat refugee camp, the City Council in the city billed the owner for the costs of destroying his property.

Media sources said the soldiers and employees of the City Council demolished the two-story home, owned by members of Houshiyya Palestinian family, on Tuesday morning, in the at-Tihta neighborhood of the refugee camp.

They added that, a few hours after destroying his property, the soldiers invaded the refugee camp again, and handed the owner a bill for the demolition costs, instructing him that he needs to pay 150.000-200.000 Shekels, including fines.

The demolished home is close to the sections of the illegal Israeli Annexation Wall, separating the refugee camp from the illegal Pisgat Ze’ev Israeli colony.