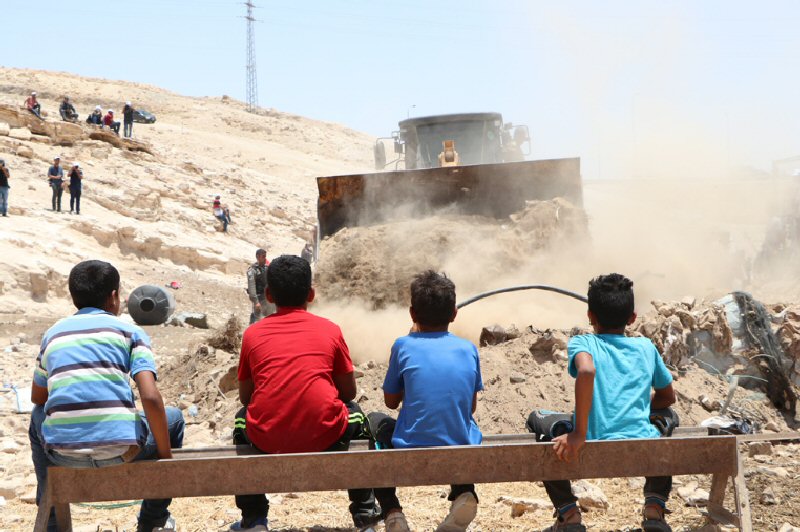 The Palestinian Bedouin community depends on al-Eizariyah town for services such as education and health clinics. As a result, the Bedouin community will be forced to travel for water, in addition to being cut off from the health and education resources in the nearby town.

Jabal al Baba is one of the 18 Bedouin communities located within the area Israel has allocated for its E1 settlement plan. Israel wants to displace all communities in this area in order to pave the way for building a large new and controversial settlement that is expected to divide the West Bank and separate East Jerusalem from the West Bank.

Israel demolished dozens of makeshift homes and structures in that area, most of them were donated by the European Union as part of its humanitarian assistance for hard-hit Palestinians in the Israeli controlled Area C of the occupied West Bank.

Meanwhile, the so-called Israeli Civil Administration, an arm of the military government, informed residents in the area that their homes are going to demolished for construction without permit, despite an order by the High Court freezing the demolitions.

According to Israeli human rights group B’Tselem, scores of farming-shepherding communities, home to thousands of Palestinians, dot the landscape of Area C, which comprises some 60% of the West Bank.

For decades, the Israeli authorities have been implementing a policy aimed at driving out these communities, making living conditions intolerable, in an attempt to get residents to leave, ostensibly of their own volition.