Soldiers Shoot A Palestinian Near The Annexation Wall In Jenin 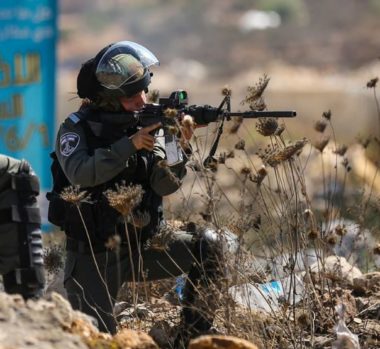 Israeli soldiers shot, Monday, a Palestinian near the illegal Annexation Wall close to Taher al-‘Abed village, south of the northern West Bank city of Jenin; the Palestinian is the tenth to be shot by the soldiers in the same area in recent days.

The Palestinian Red Crescent Society (PRCS) said the soldiers shot the young man, identified as Mohammad Tahsin ‘Aarda, 25, with a live round in the leg.

It added that its medics were called to the scene, and rushed the wounded Palestinian to Khalil Suleiman Governmental hospital, in Jenin.

It is worth mentioning that the soldiers have recently shot at least ten Palestinians in the same area, including one who was shot Sunday, without any cause or justification.

The soldiers did not try to render first aid to the wounded Palestinians and did not attempt to abduct them.