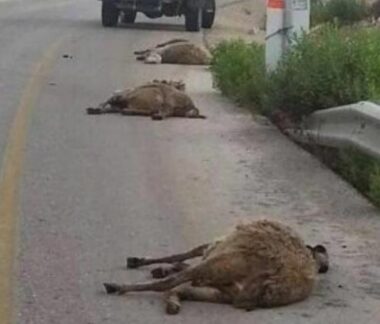 An Israeli colonialist settler, illegally squatting on Palestinian lands, rammed and killed several sheep owned by a Palestinian shepherd in Abu al-Qandoul area, in the northern area of the Jordan Valley in the occupied West Bank, before the Israeli police arrived at the scene and ordered the Palestinian to pay compensation.

Palestinian nonviolent activist Aref Daraghma said the shepherd was herding his sheep and had to cross the road to reach to a grazing area.

Daraghma added that the shepherd decided to cross the road with his sheep when the road was clear as no cars were close, especially since the herd could be seen from a distance and that the driver of the car could have stopped before approaching them.

He stated that an Israeli colonist came speeding from a distance, and rammed the sheep, killing four and injuring many others.

The Israeli police arrived at the scene, and ordered the Palestinian shepherd to pay compensation for the colonist for “damages to his car.”

In related news, Israeli soldiers confiscated a Palestinian bulldozer working on lands owned by the villagers of Birin village, southeast of the southern West Bank city of Hebron.

The bulldozer is owned by Ibrahim Daoud, and was working on privately-owned Palestinian lands near an illegally Israeli colony.