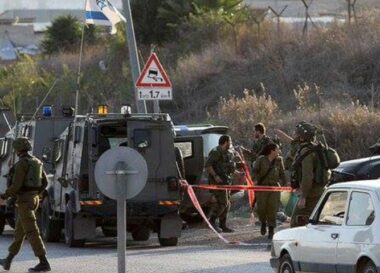 On Thursday, an Israeli colonialist settler, illegally squatting on Palestinian lands, fired live rounds at a Palestinian near Nablus, in northern West Bank, and injured him.

He added that Nassar suffered a moderate wound when the colonist shot him in the leg before Israeli soldiers took him to a hospital in occupied Jerusalem.

The Israeli army claimed that a colonist shot the Palestinian man when he reportedly tried to stab soldiers.

On Friday at dawn, the soldiers invaded ‘Anin village and Ya’bad town, west of the northern West Bank city of Jenin, and abducted seven Palestinians, including a father and his three sons.

In related news, the soldiers invaded, on Friday at dawn, Beita village, south of the Nablus, and abducted a Palestinian from his home.