Including A Father And Three Sons, Soldiers Abduct Seven Palestinians In Jenin 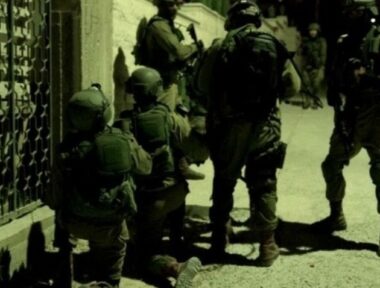 Israeli soldiers invaded, on Friday at dawn, ‘Anin village and Ya’bad town, west of the northern West Bank city of Jenin, before abducting seven Palestinians, including a father and his three sons.

The soldiers invaded the ‘Anin village from several directions before storming and ransacking many homes, causing damage.

Media sources said the soldiers abducted Fawwaz Issa, along with his sons Mohammad, Moath, and Monatser,  from their home after invading and violently searching it, causing damage.

The soldiers also invaded Ya’bad, before storming and ransacking homes, and abducted a former political prisoner, identified as Jihad Hirzallah along with his brother Saqer, in addition to Mohammad Walid at-Taher.

In related news, the soldiers invaded, on Friday at dawn, Beita village, south of the northern West Bank city of Nablus, and abducted a Palestinian from his home.