Israeli Colonists Attack A Palestinian In His Orchard, Near Bethlehem 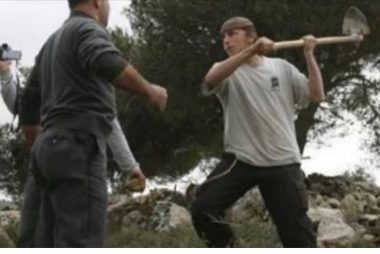 Several extremist Israeli colonists attacked, Friday, a Palestinian man, while picking his olive trees, in his orchard, in the al-Khader town, south of the West Bank city of Bethlehem.

The colonists attacked the man, Ibrahim Mohammad Sbeih, 58, in his olive orchard in the al-‘Amara area, close to the illegal Sidi Boaz colonialist outpost.

Palestinian medical sources said the man suffered several cuts and bruises to his head and chest.

Ahmad Salah, the coordinator of the Popular Committee against the Annexation Wall and Colonies in al-Khader, said the Palestinian was attacked by the colonists, who tried to occupy his land, 4 Dunams, by placing fences, to encircle it.

The lands in question are planted with Olive trees, and grapevines, Salah added.

It is worth mentioning that the attack is one of the frequent assaults by the colonists, against the Palestinian and his brothers, as the colonists are trying to illegally confiscate their lands, and frequently prevented them  from entering them.